Note: Keyboard shortcuts given in the documentation apply to the default Windows/Linux shortcuts.

Extraterm supports Linux, macOS and WSL, CMD, PowerShell and Cygwin on Windows. Download the zip file, installer or DMG for your operating system on the github releases page.

When Extraterm starts it opens one tab and runs your default shell inside it. The basic functioning of the terminal should feel quite familiar.

Multiple terminals can be open at the same time in different tabs. The plus sign next to the tab at the top of the window opens a new tab (shortcut Ctrl+Shift+T). Close a tab by using the little cross icon/button on the right side of the tab, or just exist the shell. Ctrl+Shift+Q is the shortcut for closing a tab directly.

Use the Ctrl+, and Ctrl+. shortcuts to move left and right between tabs.

Selections can be made with the mouse and are automatically copied to the system clipboard. Ctrl+Shift+C will also copy a selection. Ctrl+Shift+V, Ctrl+Insert or the middle mouse button pastes the contents of the clipboard into the terminal.

The scrollbar on the right or Shift+PageUp and Shift+PageDown let you can scroll through and view previous output.

The “hamburger” menu is in the top right corner of the window.

Extraterm features a cursor mode where you can navigate the screen and scrollback contents and select text in the terminal without having to reach for the mouse.

To go into cursor mode press Ctrl+Shift+Space. The block cursor will remain in place but there will also be a blinking vertical bar cursor. This is Extraterm’s cursor mode cursor. It works the same as the cursor in a typical desktop text editor. Cursor keys work the same and shift + cursor creates selections.

Ctrl+Shift+C (or just Ctrl+C) copies the selection to the clipboard. The cursor can be placed using the mouse. When in cursor mode no keyboard input is sent to your shell.

The Ctrl+Shift+Space shortcut acts as a toggle between cursor mode and normal terminal mode. Press it again to go back to terminal mode.

The Command Palette is a pop up menu of commands which can be easily searched and selected from via the keyboard. It grants direct access to all of Extraterm’s commands and actions. Open it using Ctrl+Shift+P. Commands which are specific to the current context appear at the top of the menu. Cursor up/down and PageUp/PageDown keys move the selection. The Enter key executes the selected command, while the escape key closes the palette. The items in the menu can be filtered by entering search text. 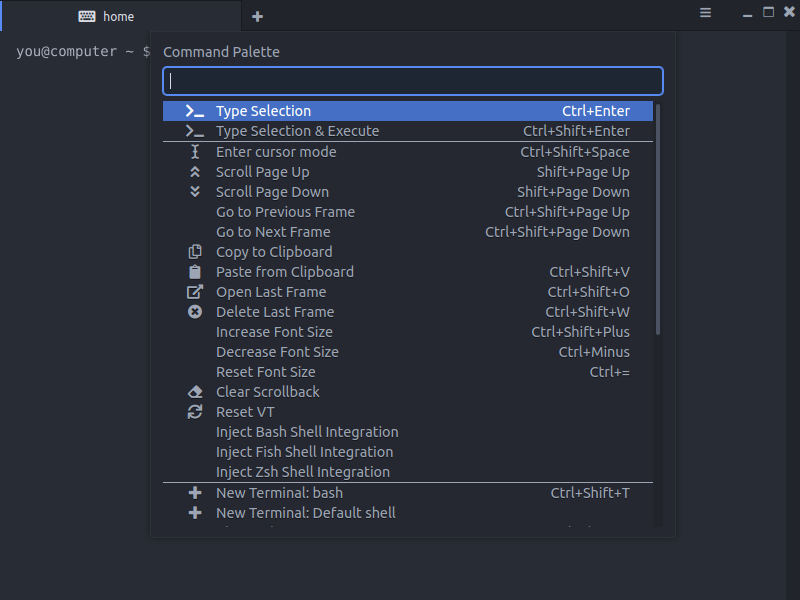 Extraterm becomes a lot more useful once the shell integration has been set up. Currently the three major shells, bash, zshell and fish are supported.

Go to the github releases page and download the extraterms-commands zip file. Unzip this file somewhere. Inside are a number of scripts called setup_extraterm.... Use your shell’s source command to read the script which matches your shell.

Read the script matches your shell using the . (source) built in command. For example: bash shell would use . setup_extraterm_bash.sh to read the script. The other shells use the same syntax.

Ideally you would read the setup_extraterm... script as part of your login scripts.

The shell integration does a couple of things:

When you run a command in your shell, Extraterm can now place a ‘frame’ around the output of the command. This frame is decorated with the name of the command, an indication of whether it returned a successful zero return code, and also some other controls.

When scrolling back through long stretches of command output, the frame’s title bar will remain visible so that you know what you are looking at.

The cross icon in the frame title simply deletes the command output. The ‘pop out’ icon moves the output into its own tab for safe keeping.

The framing behaviour can be configured in the Setting tab, accessible from the drop down menu located at the ‘burger’ menu in the top right corner of the main window. By default a number of common unix commands which don’t produce output are configured to not be framed.

In the future more shortcuts and features will be added to make more use of this framing and shell integration.

The shell integration adds a pair of new Extraterm specific commands to your shell. The show command is a general tool for showing the contents of a file inside the terminal. Currently it supports showing and highlighting many programming languages and mark up languages. It can also show the most common image formats directly in the terminal. 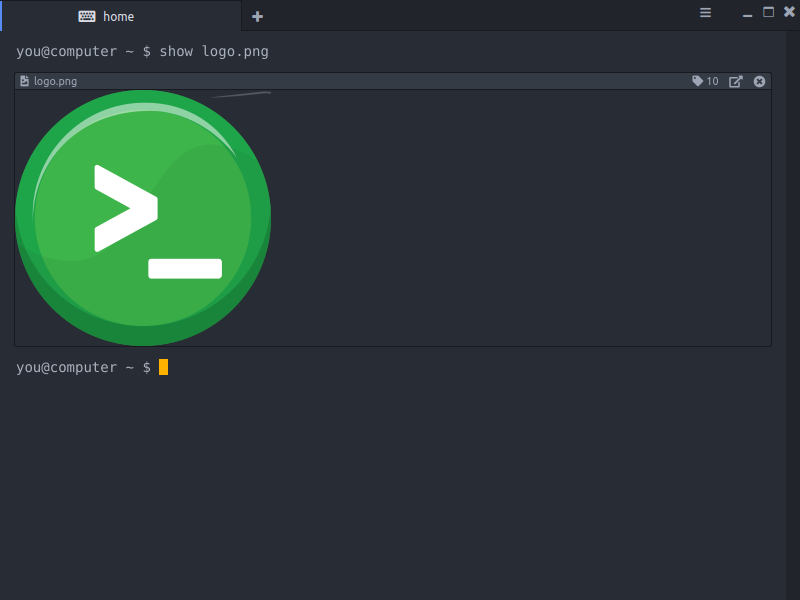 ‘show’ accepts filenames as arguments and will download an show them. It is also possible to pipe data directly into ‘show’ via stdin.

‘show’ supports a number of command line options. These options are related to specifying what kind of data is being shown. Most of the time ‘show’ can figure this out for itself but when piping data directly into ‘show’ it is sometimes useful to set them.

The from command is lets you use previous command output as input to a new command. Each command frame has a little tag icon in the title bar with a number. By running the from command with the number of the frame you want as its argument you can get the contents of that frame.

This example is somewhat artificial but it does show the basic use of from.

The from command becomes a lot more useful when you first edit the content of a frame in place to isolate the text you want. The content of frames can be edited when in the selection mode.

For example, I’ve run git status and have a couple of changes. I want to know how many words long the documents I have been working on are, but I’m not interested in the .ts ones. This is the situation after git status:

Now I can go into selection mode and cut away the parts of the text I don’t need and pull it into my pipe line.

With a shell pipe and xargs I can give the list of documents to the wc (word count) command:

Using the --save or -s option from can directly write the frame contents to disk using the file’s original filename.

Command output in a frame can be edited directly. Extraterm also has some shortcuts to make this capability even more useful.

Each terminal is contained in its own tab. New tabs can be opened by clicking on the new tab button ‘+’ up in the tab bar, or using Ctrl+Shift+T. Tabs can be ‘split’ half horizontally or vertically using the Horizontal Split and Vertical Split commands which can be found in the Command Palette. When a tab is split, it is moved to the side and the Pane Menu appears in the remaining space or ‘pane’. The menu allows you to create a new terminal, more splits or to close the pane. 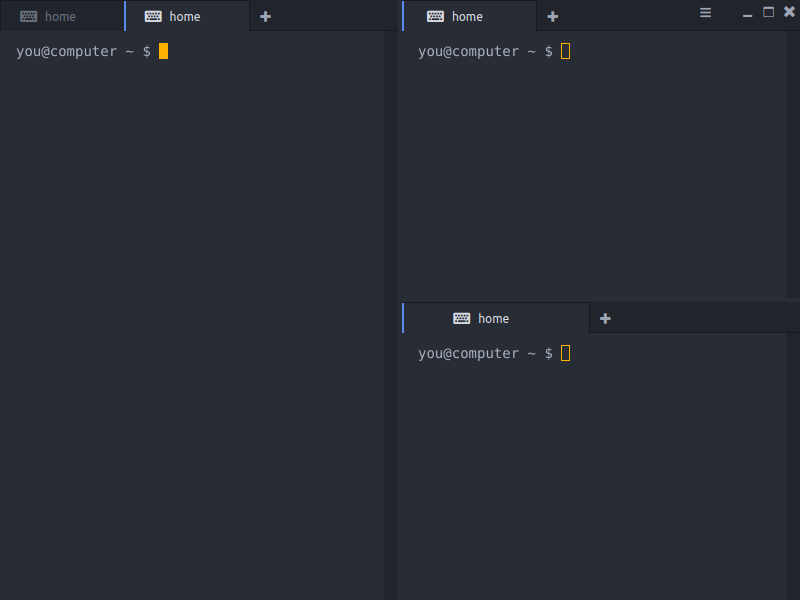 Extraterm supports mouse based gestures for rearranging tabs in the tab bar, moving them between groups of tabs, and splitting tabs to create extra panes.

See the FAQ too

The list of available keyboard short cuts can be seen on the ‘Keybindings’ tab which is accessible via the “hamburger menu” in the top right corner of the window.

Extraterm comes with a number of built in keybindings configurations. These are not directly editable. To customize keyboard shortcuts you must first duplicate one of the default keybindings sets by selecting it and clicking on the Duplicate button positioned right to the dropdown. Click the Rename button to give this new configuration a suitable name. You can now edit the keybindings for all commands.

Mouse selections when an app grabs the mouse

Some applications use the mouse input themselves and prevent normal mouse selection from working. In these cases it is possible to hold the Control key and then make a selection with the mouse.

Changing where the configuration settings are stored

It contains one setting which specifies which directory to use for user settings. If this is empty or not set, then the default location is used. If this path is relative then it is relative to the directory containing the extraterm executable.

../user_settings can be used to place it along side the location where extraterm is installed. This can be usefull when running Extraterm as a “portable app” from removable media like a USB drive.